You are here: Home / Books / Where Does Kissing End? 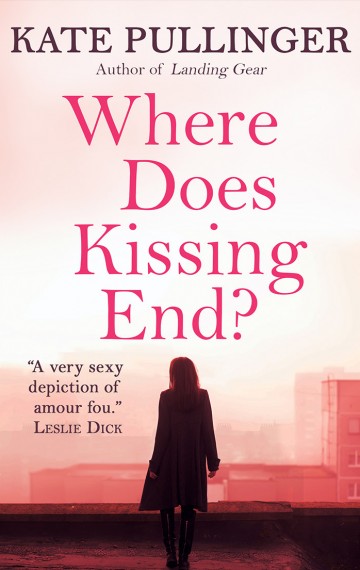 ‘Precise, compelling, Kate Pullinger takes the metaphor of vampirism and explores its every crevice, to produce a very sexy depiction of amour fou.’
-Leslie Dick’

Stephen Smith is in love. The object of his desire is Mina Savage, the illegitimate child whose parents are themselves both illegitimate, a young woman whose ambitions and appetites outstrip Stephen’s wildest fantasies.They become lovers, but while Stephen pursues domestic tranquillity Mina becomes ever more elusive and mysterious. When she repeatedly disappears at night, Stephen tries to force her to be faithful to him, with dire consequences.

Where Does Kissing End?

Harry’s mother Hilda died in the hospital where Mina was born. She died of old age, ailing suddenly and completely. To Hilda aging meant a general falling apart which she did not like; as her hearing got worse she prepared herself to die.

Hilda had warned Harry years before that when she was ready she would simply go. "There are worse things than living a long life and dying happily," she said. "And when I’m gone you will be all alone in the world, Harry. There is nothing wrong with being alone in the world. I have you and you, well, I suppose you have got the girl Mina," – Harry moved to interrupt, he had never said, not even to Hilda, that he thought Mina was his child – "although she does not really belong to you, I know. I’d watch out for her though," she said stopping Harry from speaking yet again. "There is something to worry about her, I’m sure." Harry shook his head but as far as Hilda was concerned the subject was closed and she began to complain about the Government.

When Hilda became ill Harry felt angry with her; when she entered the hospital he was enraged by the doctors and nurses whom he accused of not helping her. Hilda was soon past telling him to calm down and shut up and he would not listen to anyone else. Late one evening breathing became difficult and Hilda died in her sleep. As Harry watched his mother’s life drain from her body a huge fury filled him. He terrorized the nursing staff on night duty and reproached them for treating his mother like an unimportant old woman; he threatened to take Hilda’s body away from the hospital. He threw a bedpan belonging to another patient on the ward against the wall. Several of the elderly ladies applauded. When Mina suddenly appeared he took hold of her shoulders and shook her, shouting "What are you doing here?"

Mina did not know why she had decided to come to the hospital so late that night. She knew Hilda was there although she had not been to visit the old woman for years. Unable to sleep she got dressed and took a bus to the hospital.

Harry stopped shaking Mina and began to cry. Behind him Hilda lay still on the bed. Mina knew without going any nearer that she was dead. Harry stood with his face buried in his hands. Mina had never seen a man cry before except on television; it made her feel big and him seem small. She did not attempt to touch Harry or to speak. She just stood there and stared. Several feet away a harassed nurse watched them both.

Mina looked at Hilda again. She wondered how it felt to die. Hilda looked composed, as if she had simply left her body without violence, without attempting to linger. Mina wondered at what point she had ceased to be human.

Harry stopped crying abruptly and straightened his back. "Don’t look at her," he hissed. "She’s gone."

Over the next few days Harry spent all his time making arrangements for Hilda’s funeral. He had her body laid out for viewing in a room full of flowers at the funeral parlour and hired a limousine for the trip to the cemetery. For the roof of the hearse he ordered a wreath of orange tiger lilies, Hilda’s favourite, spelling "Mother". He went to a fitting for a morning suit and gave both Mina and Lucy money to buy new dresses, "the blackest black you can find," he specified. Lucy wondered if Harry would let her stand next to him in the cemetery. With shame, she found herself looking forward to the event. Mina was happiest about the new dress; Lucy had never allowed her to wear black before. It was a colour to which she aspired.

Harry had arranged with the owner of the funeral parlour, a business acquaintance, to be allowed to spend his nights watching over his mother. For three nights after her death he sat beside her and gazed at her face, grey beneath the beige make-up. Then on the fourth night, the night before the funeral, Harry succumbed to sleep. He had been at Lucy’s to survey the new dresses. Lucy cooked him dinner and even Mina was solicitous toward him. They both urged him to go home and spend a night in his own bed in order to prepare for the next day.

Hilda’s body disappeared that night. At the funeral parlour there was no sign of breaking and entering, nor even breaking and exiting. The coffin was empty, the flowers only slightly disturbed.

Harry’s wrath was incomparable. He virtually destroyed the room where Hilda had been and he very nearly beat up the undertaker who saved himself by displaying an outrage almost as great as Harry’s. Both men calmed down over a bottle of brandy which was kept handy for overwrought mourners. Once drunk, Harry began to find the situation funny. It was just like his mother to confound all expectations.

Lucy, arriving at the funeral parlour with Mina an hour before the ceremony was due to begin, was appalled by what she saw. Harry was lying in the coffin with a rose in his mouth while the undertaker pronounced solemn vows over him. Mina began to laugh.

"Have you called the police?" asked Lucy, her voice shrill.

"What good would that do?" replied Harry, his eyes still closed. "Put up a missing corpse poster – ‘Have you seen this woman, 5’9", grey hair, decaying’?"

"She hasn’t just walked out of here," Lucy said, nearly shouting. "For all you know her body could have been stolen by a pervert. I think you should do something about it." Harry, however, was not convinced. As far as he was concerned his mother was dead and that was all that really mattered.

The funeral went ahead with a closed empty coffin. Harry sobered up and everyone behaved with dignity. Mina was pleased by the splendour of the occasion, impressed by the graveyard and the words of the vicar. The other mourners included all of Hilda’s aging, now widowed, female friends and the retired butcher George Varney. Harry stood next to the undertaker and nowhere near Lucy who shed a few tears behind her black lace veil. Mina stood leaning into the cutting wind. She decided she felt perfectly at ease with death. Hilda’s missing body was not mentioned again.

This website uses cookies to improve your experience while you navigate through the website. Out of these, the cookies that are categorized as necessary are stored on your browser as they are essential for the working of basic functionalities of the website. We also use third-party cookies that help us analyze and understand how you use this website. These cookies will be stored in your browser only with your consent. You also have the option to opt-out of these cookies. But opting out of some of these cookies may affect your browsing experience.
Necessary Always Enabled
Necessary cookies are absolutely essential for the website to function properly. These cookies ensure basic functionalities and security features of the website, anonymously.
Functional
Functional cookies help to perform certain functionalities like sharing the content of the website on social media platforms, collect feedbacks, and other third-party features.
Performance
Performance cookies are used to understand and analyze the key performance indexes of the website which helps in delivering a better user experience for the visitors.
Analytics
Analytical cookies are used to understand how visitors interact with the website. These cookies help provide information on metrics the number of visitors, bounce rate, traffic source, etc.
Advertisement
Advertisement cookies are used to provide visitors with relevant ads and marketing campaigns. These cookies track visitors across websites and collect information to provide customized ads.
Others
Other uncategorized cookies are those that are being analyzed and have not been classified into a category as yet.
SAVE & ACCEPT